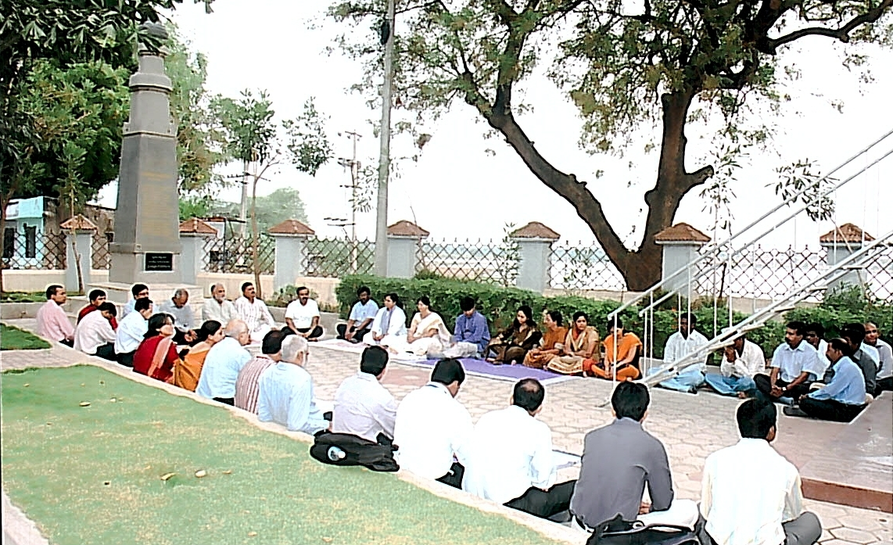 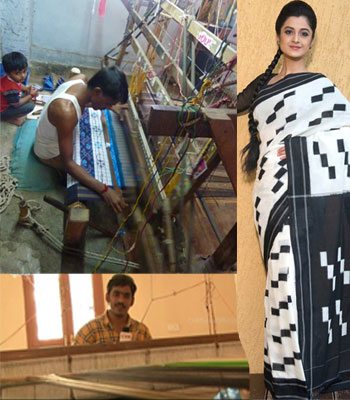 Pochampally is a small village situated in the district of Nalgonda in the state of Telengana, India. The village is around 45 KM from Hyderabad, capital city of Telengana. It is near to the famous Ramoji Film city. Pochampally is surrounded by hills and lush green fields. Pochampally is the place where threads and colours find their way into the hands of skillful weavers and meander into the market as beautiful sarees and dress materials. Pochampally is a typical weaving village.

18th April 1951 was an historic day of the very genesis of the Bhoodan movement. Vinoba Bhave visited Pochampally mandal in Nalgonda district. Vinayak Narahari Bhave was known as Vinoba Bhave who was an advocate for nonviolence and human rights and is well known for his Bhoodan Movement to help the landless farmers. The organizers had arranged Vinoba's stay at Pochampally, a small village with about 700 families, in which two-third were landless. Pochampally villagers gave Vinoba a warm welcome. Seeing the plight of landless villagers, Vinoba inquired whether anything is possible to do, if it is not possible to get land from the government. Vedre Ramchandra Reddy, the local landlord got up and said that he is ready to donate 250 acres. This incident neither planned nor imagined was the very genesis of the Bhoodan movement and it made Vinoba realize that there is some potentiality in solving the land problem of India. This movement later on developed into a village gift or Gramdan movement. As such the huge, massive and magnificent movement called Bhoodan Movement was born at this village Pochampally, the village was renamed to Bhoodan Pochampally.

Markandeswar temple: In Pochampally there is a famous temple named Markandeswar Temple which is dedicated to Lord Shiva in the form in which Lord Shiva has blessed Markandeya and saved him from Yama the Lord of Death. The temple is situated near the market.

Pochampally has traditional looms, whose design is more than a century-old. Basking under the glory on par with the weavers of other places, Pochampally weave is popularly known as tie and dye weave. The uniqueness lies in the transfer of design and colouring onto warp and weft threads first and then weaves them together. The fabric is usually cotton, silk and sico - a mix of silk and cotton. Increasingly, the colours themselves are from natural sources and their blends. The consumer-weaver interactions provide inputs for new designs. The weavers from the older and new generation have shown resilience and adapted themselves to the changing tastes of the consumers.

Chenetha Gurukulam (School for training in handloom weaving) has been started with the spirit of introducing & handing over the ancient art to the world. With experienced Gurus here popularly known as Master Weavers, the Gurukulam teaches the entire process of Weaving since from its inception to Ready to wear condition. The Gurukulam comprises different programs with multiple course durations.

In Pochampally dyeing is done with tie and dies technique, in which the warp, weft or both are tie-dyed before weaving to create designs on the finished fabric. Great care must be taken in tying resist areas with water repellent material such as bicycle inner tubes cut into strips. The precision of the wrapping determines the clarity of the design. After wrapping, the warp threads are dyed. When finished and unwrapped, the areas under the ties have stayed the original colour. Numerous colours can be added after additional wrappings. Designs generally are worked out on graph paper. Since designs are already incorporated in the threads, great care is to be taken while putting the warp on the loom. Keeping all the threads in position is necessary for the design to work. The natural movement during weaving gives designs a feathered edge which characterizes this technique.

Pochampally handlooms are well known for the durability of the colours used in the yarn. The mixture of colour gives the durability. The count used in weaving gives the softness and hardness of the fabric. Count means the number of threads used in the length and breadth for weaving known as warp and weft respectively. Each and every thread of the Pochampally saree is hand woven. In Pochampally frame looms are used for weaving. Here each weaver works from home with all the family members helping in different processes. May be, the grandmother will be winding bobbins, while the wife is marking out the design on warp threads and the husband is weaving on a loom in the main living area. Their life revolves around weaving.

"Hello Sridhar,
I am happy with the order. The saree is very nice and colour is same as photo. The blouse stitching is nice and perfect.
--Jyothi"
22-08-2019
Jyothi Saligram
"hello
very happy for your help. i totaly loved them and parcel reached just in time with all your cooperation. thanks a lot.
"
17-08-2019
Pushpa Srinivas
"thank you sridhar.
beautiful saree for our anniversary. it made our day. all the best to you.
sirisha, bengaluru"
29-07-2019
Sirisha palla
"Dear sir,
The stole was too good & loved it. i will refer to my friends too.
sony, jaipur"
03-06-2019
Sony Agrawal
"Great service. The whole process was done seamlessly. Keep up the good work!

I will recommend it to all my family and friends. "
07-05-2019
Lakshman Sridhar
"Sridhar garu,
the lehanga stitching very good. looking beautiful on our daughter. i will buy a sari for me soon.
thanks
sailaja, nandigama"
20-04-2019
Sailaja kandukuri
"Loved the saree, did everything I asked for and more. Thank you, and I will be a repeat customer.
"
12-03-2019
Alice Mathew
"Dear Sridhar,

I am very happy with the service. I had ordered the Saree on 4th Jan and expected delivery to UK was 16th Jan but I received the Saree well before on 11th Jan. The blouse stitching is a perfect fit. Saree exactly the same as seen..."
12-01-2019
Vandana
"Hi Srider garu ,I’m in USA.im willing to start saree business will u provide the material for me."
07-07-2018
Deepthi
"Hi
I m from delhi and want to buy sarees for resale. I will be visiting Pochampally on 17.04.2018. Thank you for your help. Regards"
15-04-2018
Aarti Gupta

Manufacturers & Independant Business house of Pochampally handloom ikat products since 1975.  We are serving customers online from 2006.  A pleasant and satisfying shopping experience for you,  is a promise we keep here.